Friday, June 14, 2013 was a very warm, sunny day in Michigan. My routine had been to grab some sun rays in the backyard around noon every day. As I got ready to go outside, I realized that today was the first day of the year that the new leaves had arrived on the trees and my normal sun spot was no longer available. One quick decision changed the course of my life – I choose to grab my towel and head out to the nearby beach for unobstructed sun.

Falling asleep on my towel, I vaguely remember the voice of a child, with whom I was not familiar, ask me “Hey mister, would you like to come over and check out our hole in the sand?”  I reluctantly went over to the hole in the sand and offered the two boys some advice, “keep digging and you’ll eventually end up in China”  and I went back to my towel. When the boys left the beach for the day, they stopped by and asked me watch over the hole to China and keep it safe.

Later that day, I was at a local event with some neighbor friends and and ran into the boys, “Gio” and “Gavin”. Their mother, Jennifer noticed as well and pointed out that I was the guy from the beach earlier. They were both quick to point out that I had failed my task as I obviously was no longer guarding their hole in the sand.

Over the course of the summer, I logged over a thousand miles on my bike. Cutting through the park along the beach was often part of my route. If the day was sunny, Jennifer and the boys would often be at the beach. We would usually hang out, frisbee, play volleyball or football.

The end of summer approached and I figured my time with the Randazzo trio was nearing an end. One of the last good beach days, Jennifer convinced me to let her drive me home instead of riding my bike home. She didn’t understand that I really wanted to ride my bike, however, I let it go and allowed her to drive me home.

When Jennifer and the boys arrived to my house, they instantly fell in love with Owen, my french bulldog. The three of them would form a friendship that was unbreakable, and now, Jennifer knew where I lived, but not my last name. Enter the technology.

I was out of town on a trip and realized that I had no way of contacting Jennifer again. While I prefer to stay intentionally removed from Facebook, I did realize that it was probably the only way I would be able to contact her. Thinking along the same lines, Jennifer had already sought to connect and had sent a chat request to which I responded.

The first time we spent time together alone, we ended up at one of my favorite local hiking spots to watch the sunset. Hiking is something we still do together to this day and I feel that it keeps us strong both physically and as a couple. I’m very thankful that we have found each other. We share so many similar interests, both enjoy the outdoors and being active. 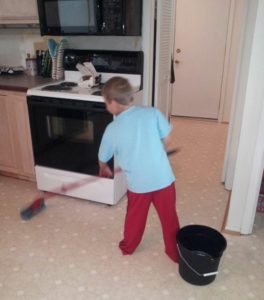 Friday, June 14, 2013 It was a warm sunny day.  I had convinced the boys that if they would help  me clean the house I would take them to the sandy beach.  They helped mop, scrub, and clean.  I took them to the beach with all of their beach toys.  As I laid there in the sand listening to them play I could hear them talking to someone.  They had chosen the closest person to our beach towels and by this time it was about 2 o’clock or so and I was getting hungry.  I told the boys they had 5 more minutes before we had to leave.  They finished digging their hole and asked the person closest to our towel to watch their hole, they had to go home for lunch.  I faintly remember hearing, “Yeah, sure kids, ok.”  Later that night I took them to a movie under the stars and we laid out on our blankets on the local football field watching ‘101 Dalmatians’ on a big screen.  Before the movie started I remember thinking as I gazed onto the blanket a few blankets over from ours, and I said, “Hey boys, isn’t that the guy from the beach.  “Hey, he is supposed to be watching our hole.” 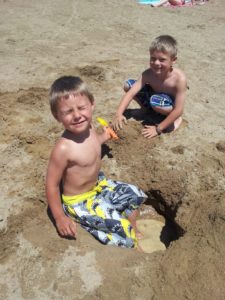 As the summer went on we went to the beach a lot.  Every time we would go, the boys would search the beach for their friend.  The boys loved playing on the beach with Matt, volleyball, soccer, swimming… The boys would have a blast while I laid comfortably in the sun.  One blazing hot day I ventured into the water and Gavin spent the afternoon swimming between Matt and I.  We were talking of our adventures and the boys were having so much fun with him and I was beginning to also. Summer was coming to an end.  We soon would be leaving the state for a trip to Colorado and we knew that Matt’s birthday would be happening while we would be gone.  So the night before we left we bought 3 bottles of Gatorade and 3 mylar balloons, we tied the balloons to the bottles, set them on his front porch and left for Colorado. 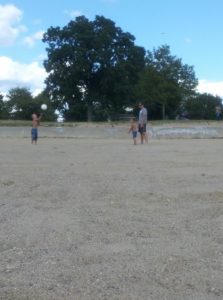 While on our trip my head was filled with thoughts of beach days with Matt.  When we returned from Colorado I thought I would do a little investigating.  I remembered one night during the summer when we dropped him off, he said, “Don’t look me up on Google Maps with my 18 sky lights…”  I took that as an invitation.  Before I knew it I was Facebook messaging him at 2am while he was in North Dakota.  When he was back from ND I invited him to our finest local Chinese establishment for a flaming volcano (He had mentioned in an earlier conversation.).  Then we headed over to Highland Recreation Center to walk by the water.  That is where we were amazed by the sky’s sunset that evening. I took over 40 pictures that evening of the sky.  I am sure, still to this day, it was one of the most amazing shows the sky had ever displayed. 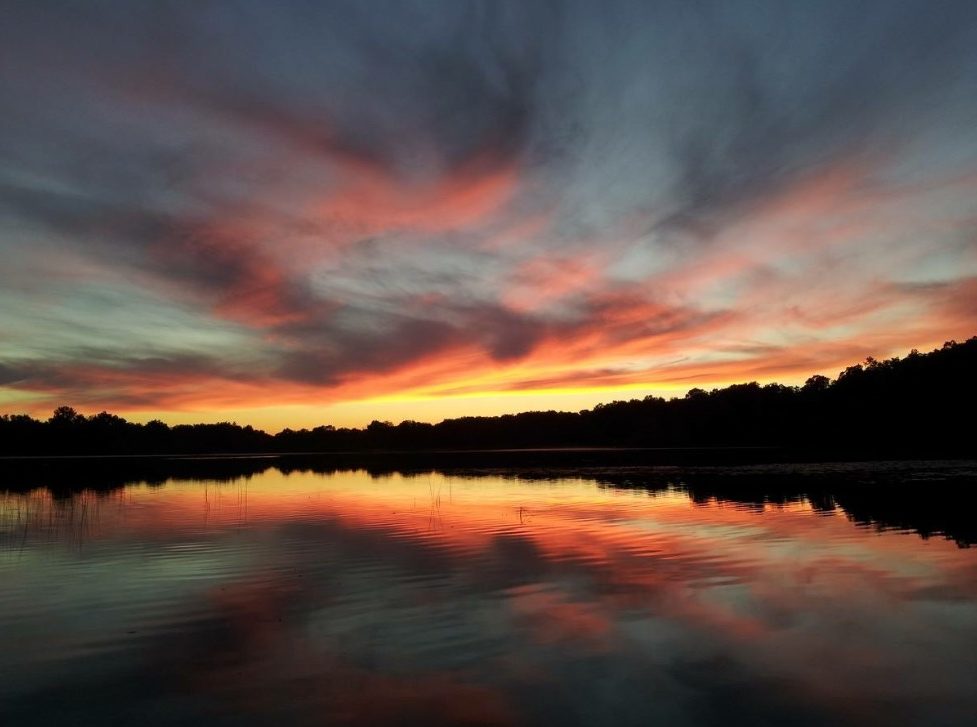